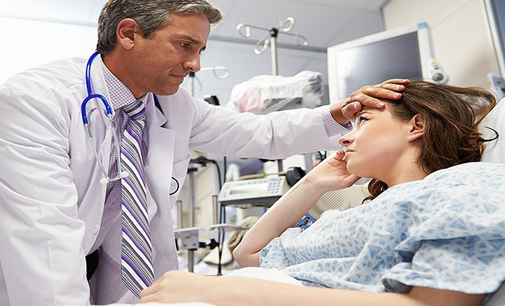 Influenza is a kind of respiratory illness caused by a virus. Influenza is a highly contagious viral disease that is spread by the coughs and sneezes of an infected person.Influenza virus is transmitted among humans in mainly three different ways:

(a) being in direct contact with an infected person
(b) being in contact with objects that are contaminated (toys, doorknobs)
(c) by inhaling virus-laden aerosols.
The kind of effect each mode of transmission does to a person differs from individual to individual. However, according to government agencies recommendations, influenza control in healthcare includes measures that minimize its transmission by fomite(by using contaminated objects) and aerosol ( transmission through air ) mechanisms.
Respiratory transmission is dependent on the amount of virus particles present in the contaminated air. Whenever, we speaking, singing, or even breath all such normal day-to-day activities produce aerosols that cannot be avoided. However, special precautions need to be taken when we cough or sneeze, as it leads to forceful expulsion of the virus from the host body into the environment. While we cough we excrete hundreds of droplets of the virus whereas when we sneeze the amount of virus droplets that we excrete from our body range around twenty thousand. Size of aerosolized particles excreted by us via these activities greatly differ. The contaminated droplets transmit an infection to the people who are exposed to it. Contaminated droplets of the size of 1-4 microns are known as ‘droplet nuclei', they are the most dangerous ones as they travel far and wide depending on the wind. As, they tend to remain suspended in the atmosphere and affect each and every individual that is exposed to them. They target the lower respiratory tract of their new host and make them fall ill. Also, Inhalation of these droplets that are suspended in the atmosphere has adverse effects on our health as the virus affects the upper respiratory tract causing an infection to the exposed individual.

There is a very tragic incident that proves how important is the control of aerosol transmission in the spread of influenza. In the late 1970s, there was an outbreak of influenza that happened aboard a commercial airplane. There were 54 persons on that plane at that time. It was delayed due to malfunctioning of the ventilation system. While repairs were made, travelers were asked to remain on board. Within 72 hours of this incident, more that 3/4th of the population aboard developed influenza. After conducting a study on the infected people, it was concluded that the source was a single person who was infected with influenza.
Virus particles are present in the nasal secretions that are solely responsible for the transmission of influenza virus. Whether it is direct or through contaminated objects. A person who is frequently infected touches their conjunctiva or the affected area frequently. The virus thus gains access to the infected person’s hand. The infected person cannot be quarantined. Through contact with individuals or affected objects, the virus is transferred to another person. The newly exposed person then infects themselves unknowingly by touching their nose by giving access to the virus to their vital respiratory organs. A study suggests, more than 50% of objects in our homes and daycare facilities harbor influenza virus. It must also be noted that infectious influenza virus tend to persist on paper currency for many weeks.
A precautionary measure of influenza transmission must be enacted by the infected person. Which includes healthy habits like covering your nose and mouth when coughing or sneezing. Infected persons are also advised to wash their hands often with alcohol-based hand cleanser. Government agencies don’t usually recommend face masks as a vital step in combating influenza outbreak. The most important fact that you must know about influenza, a day before symptoms start to show maximum shredding occurs. So if you think you are exposed to influenza virus, consult your doctor and take a proper measurement to avoid it from spreading.
Author : Dr. B. Cory Harow is an emergency medicine doctor in Boynton Beach, Florida. He received his medical degree from Stony Brook University School of Medicine and has been in practice for 16 years.
Posted by Health Natural Guide at 2:12 AM