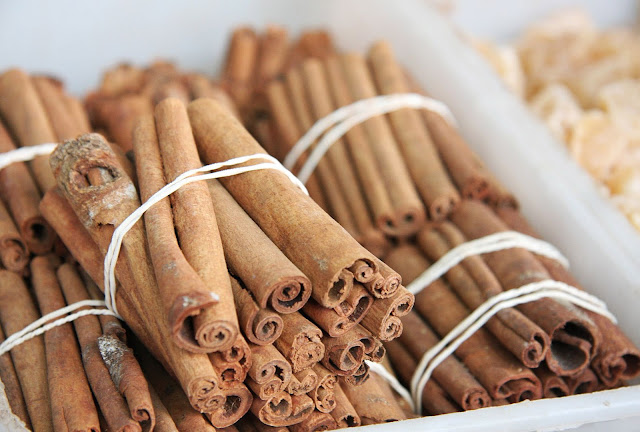 The spice cabinet in your kitchen is qualified enough to become your herbal medication box, all thanks to the natural healing powers of its popular members!

While turmeric is a good antiseptic, ginger is considered a very good antacid. Cloves help you in getting rid of toothache and cardamom is a great mouth freshener. In general, all the spices are rich in antioxidants and have some capacity to fight with infections.
But the most interesting of all is cinnamon. This spice has a glorious past. Egyptian legends have it that cinnamon was considered as precious as gold. Also, it was a great preservative that was used to embalm dead bodies, in the process of making mummies.
Till date, this spice is one of the greatest natural healers. Its chemical ingredient is cinnamaldehyde and a few other essential oils and polyphenols impart the characteristic smell and flavor to it. Cinnamon oil and the cinnamon bark are used to treat a variety of symptoms.
Cinnamon can be used as a natural healer for:
1.       Relieving stomach-related issues
Indigestion is the root cause of many problems. It leads to bloating, stomach cramps, aches, flatulence, nausea, and GI infections. Here is how cinnamon helps you with these issues:
a)      Cinnamaldehyde found in the spice is of great help in treating diarrhea in infants. If the requirement is for infants, go for Ceylon cinnamon instead of Cassia variety. The latter has more coumarin content and affects liver function.
b)      Tannin present in cinnamon helps in treating GI tract infection by killing bacteria like Salmonellaand E.coli.
c)       The astringent nature of cinnamon helps in fighting indigestion and relieves dyspepsia-related nausea and flatulence.
2.       Regulating blood sugar
Cinnamon boosts insulin activity and is therefore advisable for diabetics. A pinch of it in their daily diet regime is considered good.
3.       Benefiting heart health
Cinnamon stabilizes HDL levels while reducing LDL levels. This property makes it very beneficial for heart patients.
4.       Fighting fungal infections
Cinnamon leaf oil helps in killing fungi responsible for causing various skin infections. It also relieves symptoms like rashes and itches. Cinnamon effectively treats Candidiasis too- a fungal infection that affects genitals (largely) and the oral cavity.

5.       Curing bacterial infections
Cinnamon extract is used in various herbal toothpastes and mouthwashes. It kills bacteria that induces bad odor or tooth decay.
6.       Fighting cough
Cinnamon stick powder boosts blood oxygen level making the body more capable of fighting throat infections. Cinnamon tea is an effective herbal solution for curing cold and cough.
7.       Relieving joint pain
Cinnamon is rich in manganese that strengthens bones and joints. This helps relieve joint pain in arthritic patients.
Other lesser known healing properties of cinnamon are:
Recent studies have revealed that cinnamon can play a crucial role in the management of various neurogenerative and incurable diseases like Alzheimer’s disease, Parkinson’s disease, and cancer too.
1.       Cinnamon is one of the best known antioxidants, and therefore, is being used in making medicinal preparations meant for curing cancer.
2.       Cinnamon is found to have a positive impact on the brain cells that promote memory and affect response time.
A word of caution
As mentioned above, Cassia Cinnamon has more coumarin content. Ceylon Cinnamon is safer and the more beneficial variety of the two. Therefore, those people who are prone to liver infections or are undergoing treatments for liver-associated diseases are advised not to consume too much of the spice on a regular basis.
About Author
With a vision of making world the better place, Truworth Wellness is passionately involved in providing ultimate online help to people who want to stay healthy and live happier. All applications, portals and programs launched by Truworth Wellness emanate one common message – live well! For daily health tips, follow them on Facebook and Twitter.
Posted by Health Natural Guide at 3:17 PM