Neglected Yet Destroying Act of Parents Fighting in Front of Kids 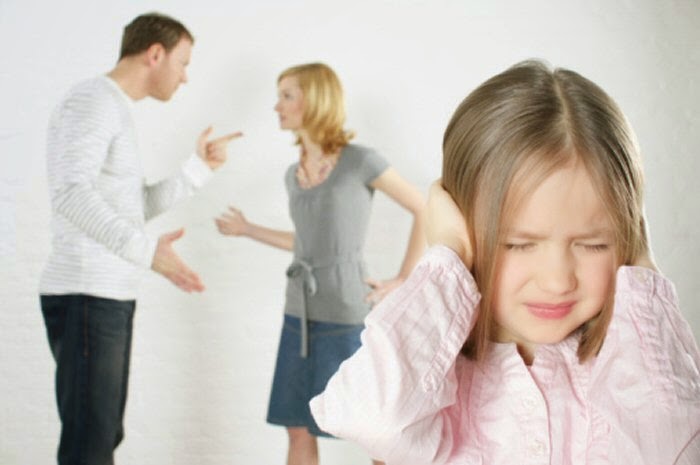 Where there are people, arguments happen. Sometimes these arguments happen between the spouses. It is a natural phenomenon but should it be really done?
The truth is that all around globe many children are affected by the fights or arguments of parents in front of them. It really damages them emotionally. Especially those children get mentally stressed who are attached to their parents. There are so many doubts and questions that arise in their minds and they really are terrible. Only if parents get to see their fight in eyes of their children they would have understood that it is a really nasty affair.
Children thinking it as their fault:
It is not unknown that many children have been shown on TV shows etc. saying that it is may be their mistake that their parents fought. But the reality goes really deep. As the times are getting busier and really hard monetarily, parents are unable to fulfill all the responsibilities and that is when the arguments happen and children think that maybe it is their fault that this argument started in the first place. This thing can make your child feel inferior and it is very much possible that the children react because of their negative feelings.
Sign that your arguments have gone beyond the control of your child:
Children who face the situation such that their parents are fighting in front of them, they lose their peace of mind. This makes them lose sleep, eat less or maybe get cranky. Some of the children are reported that they bully children because they want to express their negative feelings. Then there are some grown up children who might stay outdoors a lot or may be isolate themselves. These all are the signs of stress building up in their minds and it is just because of one mistake of parents that is fighting in front of children.
How to deal with such situations:
As mentioned already that the spouses do get in fight and it is totally natural, but it is not always because they don’t love each other. Now this situation has to be mentioned to children. If by chance you have already fought in front of children, talk to them and make them understand and when the problem is settled down show love for your whole family so that child feels loved and secure. Children’s mind is very sensitive and it very necessary that you take care of fact that the child needs your care. First of all never fight in front of them because these flowers will be shattered or if you do just make them understand and try to make your children feel loved. It is noticed that children are influenced by the life and actions of their parents and they follow their parents so parents should ignore all the problems and focus on the healthy upbringing of their children in order to make them responsible citizens of society.
Author Bio:
S Paul loves to write about different topics and try to explore the world. S Paul has written more than 1000 articles on different topics such as interior decoration, health, beauty and others.
Google Plus id: https://plus.google.com/u/0/+SPaullovecreativity/
Posted by Health Natural Guide at 3:31 PM